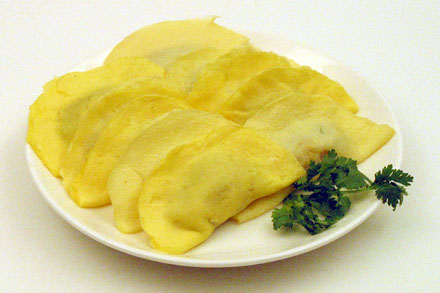 I was sixteen when I left Singapore to attend the university in Boston. To combat my homesickness I surrounded myself with many Chinese students from Taiwan. This was not by design, but rather they were the students from Asia I found sympathetic to my loneliness. It was the mid 1970’s and China was at the end of its cultural revolution. Nixon had just visited the then reclusive regime, and there was a lot of anxiety among my Taiwanese friends about the survival of Taiwan and their own future. The Republic of China (or Taiwan) was about to be abandoned diplomatically by America. Amidst all these development my Taiwanese friends would gather at comforting and bountiful meals to calm each other. Food was the salve that soothed everyone’s nerves.

These gatherings often involved communal cooking. We regularly made dumplings together for a meal, or collectively cut up ingredients for a hot pot dinner. It was during one of those meals that I learned how to make egg dumplings (蛋餃).

Egg dumplings are typically Taiwanese. Although my schoolmates told me they were of Fujian origin, I’ve not had them at home before. They are commonly included in a Chinese New Year hot pot meal as symbol of prosperity. As far as I’m concerned it is all about the delicious meat filling and the very light egg wrapper. If they should also bring good fortune all the better.

These dumplings are made by wrapping a lump of ground pork filling in omelet-like egg wrapper. The key to the success of making the dumpling is good control of the heat under the skillet. When spreading the egg batter to make the wrapper, the temperature of the skillet should just be hot enough to quickly form a cooked skin on the bottom but keep the top uncooked and moist. Fill the center of the dumpling with a small quenelle shaped lump of filling. Use a spatula to flip the wrapper over the meat and press the edges down against the skillet to seal the dumpling. It may seem difficult at first, but once you’ve gotten the temperature of the skillet regulated properly it is quite easy.

I like to use these dumplings as an ingredient in a hot pot. I also use them in a chicken stock based soup by adding shredded napa cabbage, sliced shiitake mushroom, sliced bamboo shoots and a little bit of cellophane noodles.

I’ve lost touch with many of my old school friends but I still treasure our experience of the university years. China has changed tremendously and not always for the better. Majority of its citizens are now very prosperous and personal choices in their daily life have improved. Yet political choices and freedom of expression are still non-existent. On the other hand, I feel encouraged by the positive transformation in Taiwanese politics. It has matured in the process of liberalizing and democratizing the governing institutions. I do wonder if there is a solution for this complex “two China” situation. Will the younger political generation diverge from the old thinking and move the government to a more accountable body? Or will the corruption of the government prevent this evolution? I’ll continue to eat egg dumplings and hope for the best. 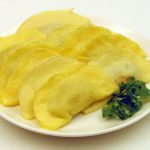