Two weeks ago a Chowhound forum user, Gordon Wong, started a discussion thread and he questioned whether mooncake is like fruitcake: often gifted but rarely eaten. I was pleased to read that majority of the responders reported they love mooncake and do eat them. I too am a fan of mooncake. I like them so much that I often wait until after the Mid-Autumn Festival so I can buy more of them at a discount.

Mooncake is not something that one would indulge in in large quantities. At least not the Cantonese style mooncakes. Their outside is a thin pastry while the filling is dense and quite sweet. So even for a mooncake lover a little bit goes a long way. I adore the compact yet smooth texture that often reminds me of silky sweet fudge. Salted duck egg yolk is often added to the center of the filling, and the extra saltiness helps cut down on the sweetness while enhancing the overall flavor. A good mooncake filling is what makes the cake.

Two traditional types of filling I like are lotus seed paste and black sesame paste. Cakes filled with these fillings almost always include a salted yolk or two. Sometimes even three or four, which I think is really a bit excessive. There is also a version of mooncake filled with black sesame paste studded with melon seeds that I fondly remember growing up in Singapore, although I’ve not seen them here in New York. Perhaps they were a local variation only available in Singapore.

I often make mooncake at home for the Mid-Autumn Festival with the intention of creating a better filling than the commercial ones. But making the filling is laborious and time consuming. I’ve not always been successful, yet I’ve gotten better and I’m determined to slowly perfect it. This year I decided to make black sesame paste with salted yolk. The base for black sesame paste is a red bean paste made from small red-colored beans also known as azuki beans in Japanese. To ensure a smooth texture the beans have to be soaked overnight and cooked in plenty of water until soft, then pureed and passed through a sieve. At this stage the bean paste is more like a thick soup. So the next step is to cook this soup in a wok over medium heat to let the moisture evaporate. A wok is ideal for this purpose since the wide open shape accelerates the dehydration. In order to prevent scorching the bottom of the wok, the soup has to be stirred and scraped continuously for about 30 minutes. This is where a baker’s skill and patience are tested. Still when the sesame paste turns out well, like it did for me this year, I can assure you that it is very satisfying.

Cutting through the finished cake I discovered a bright yellow moon right in the middle of a black midnight sky and knew that all time and effort I spent had paid off. My best wishes to all for a great Mid-Autumn Festival. 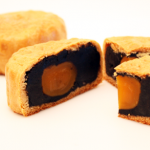 6 thoughts on “Midnight Moon in a Cake”