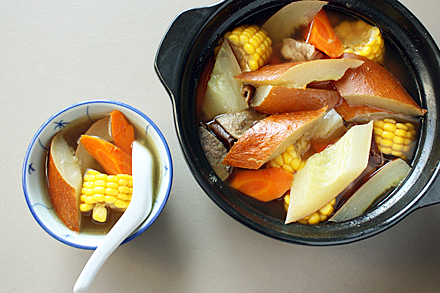 Cucumbers are known as “yellow gourds” (黃瓜) in Chinese. They are sometime also called “baby yellow gourds” (小黃瓜). I’ve always wondered why they’re called “yellow” since cucumbers are obviously green. Even with all the different varieties, they are all still green. But a few years ago while having dinner at a relative’s home in Hong Kong, her cook served a soup made with a wrinkly yellow-brown skinned gourd with slightly green flesh that she announced was mature cucumbers. That’s when I realized why cucumbers are called “yellow gourd.” They turn into a yellowish gourd with tough dry skin when mature.

The term “old yellow gourds” (老黃瓜) explains why the green cucumber is often known as “baby yellow gourds,” differentiating the two. I was actually quite relieved, in my neurotic way, by this revelation after years of wondering if I might be somehow selectively colorblind. Moreover I recently learned a Chinese proverb that refers to an older person who pretend to look young as “a mature cucumber painting itself green” (老黄瓜涂綠漆… 裝辣). It just shows how much there is to learn about cucumbers.

Mature cucumber, as it turns out, is regularly used for making soup in Cantonese cooking. It is classified as a yin or cooling ingredient, and being abundant in the summer, is commonly used to help cool the body and prevent heat stroke during the hot season. Other yin ingredients including tangerine peel, carrots, and beans can be added to increase the cooling and other medicinal effect. And to make the soup even more appetizing pork, chicken or other poultry meat is added to enrich the soup stock.

The other key to success for slow cooking Cantonese soup is accurate temperature control. The soup should be simmered very slowly, where the liquid is just barely bubbling, for one to two hours. The best way to maintain the perfect steady temperature is to cook the soup in a clay pot. A covered clay pot that comfortably contains all ingredients are ideal as it retains and distributes heat evenly through the soup.

The Cantonese are well known for making great soups. In fact the terms for slow cooking soup, “bao tang” (煲湯) in Mandarin or “bou tong” in Cantonese, are enduringly attached to Cantonese cuisine. A Cantonese dinner in a restaurant or at home is never complete without a pot of soup. So it is natural that mature cucumber is one of their favorite summer soups. In my recipe for mature cucumber soup I’ve chosen to use corn, carrots and tangerine peels in a pork bone stock. It is a typical combination and has a very pleasing herbal aroma. Try this summer soup to get some relief from the sweltering late August heat. 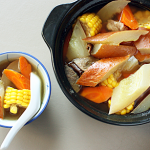 Remedy For That Summer Cough