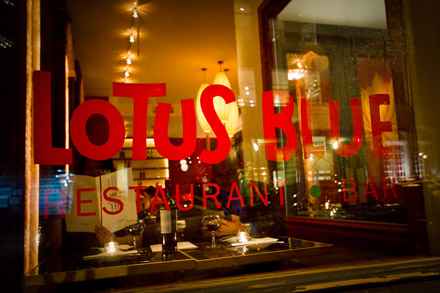 It’s official! Lotus Blue is now open. Four months of researching and developing the menu, plus hiring and training of the kitchen staff finally culminated in our grand opening last Tuesday, February 21st. New York’s first restaurant serving a full menu of authentic and modern dishes from Yunnan province of China is now open… and I am having the thrill of a lifetime.

For years I dreamt of opening a restaurant but it remained just that: a dream. I resisted the urgings of many of my friends because my fear of failure was too strong. That is until I started working with Lotus Blue’s owners, Robert Zhu and Jeffrey Lim. Robert operates two very successful restaurant properties in Beijing, and was looking to expand his operation to New York. Jeffrey came on board to become the general manager of the restaurant. After more than a year of careful research and planning, a concept emerged in early 2011 to create a Yunnan themed restaurant. By the time I agreed to be their consulting chef in October they found a location for Lotus Blue in the old space of Tribeca’s Nam restaurant. My dream of being intimately connected to a restaurant kitchen became a reality. From the very beginning of my involvement with Lotus Blue I wanted freshness and excitement in the menu. Surveying the authentic Chinese restaurant scene in New York I found them mostly operated by recent immigrants, who want to faithfully reproduce their hometown cooking. This is a laudable approach but is often lacking in innovation. Other modern Chinese restaurants try to fuse Western style cooking techniques to modernize Chinese food. Done well it can create spectacular result, but in my opinion not truly Chinese food.

I chose a different route by creating new dishes using classic Chinese cooking techniques and staying true to the flavors of Yunnan. It is by no means a novel idea to modernize Chinese food in this way. Many upscale Chinese restaurants in Asia use this approach to create successful and innovative menus. I am merely adapting this method to the Yunnan inspired menu of Lotus Blue. What ensued is a collection of new interpretations for many traditional dishes.

Judging from the positive response to the food during our soft opening before Tuesday, I think we’ve made the right choice. So come dine with us at Lotus Blue and you can taste my version of modern Chinese food. I’m sure you’ll enjoy it and wish you had the recipes. So I’m sharing one for the Yunnan pickled turnip fried rice. And incidentally I’ve been asked to become a permanent member of the team at Lotus Blue as their executive chef. How sweet it is!