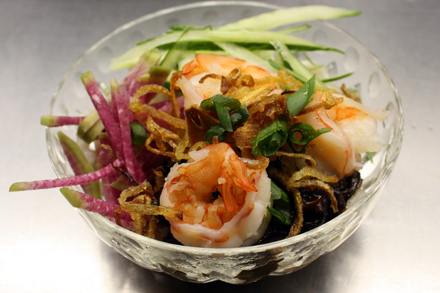 Have you ever gotten into a situation where two friends you’ve invited for dinner have different dietary constraints? One doesn’t eat red meat, but another would eat just about everything except liver. And you’ve been planning to serve your signature beef Wellington to dazzle your guests. Being the good host that you are you put on your creative thinking cap and accommodate them by changing the menu.

Last weekend I found myself in precisely this type of predicament. Our friends Bob and Even organized an intimate potluck dinner. Among the group of eight guests one was a pescetarian and another just simply abhors shellfish. I needed a plan that could satisfy both guests.

You may recall I’d done some taste testing for classic Beijing zhajiang mian (炸醬麵) a few weeks ago. You may also remember that Robert Zhu, who is one of the owners of Lotus Blue, promised to share his mother’s shrimp version of zhajiang mian. A light bulb sparked over my head and I decided to make both versions of zhajiang mian.

Auntie Wang’s shrimp zhajiang mian recipe uses fermented bean paste (豆瓣醬 sometimes labeled as soy bean paste) as the base for the sauce. While I felt that the fermented bean paste is not suitable for the pork sauce, it works really well with wood ear (木耳) and shrimp. The paste lends a hint of earthy flavor to the entire dish.

Perhaps the use of wood ear is the key to the success of this sauce. The crunchy texture offers a nice balance to the slightly lumpy bean paste. Robert also mentioned that his mother often substitutes fresh shrimp with dried shrimp. Personally I like the succulent meat of fresh shrimp. But adding a small quantity of dried shrimp in the sauce may heighten its flavor. So that is probably what I would experiment with next time.

I must admit that I was rather skeptical initially when Robert told me about his mother’s recipe with fermented bean paste. But after publishing the original pork zhajiang mian post, I received numerous comments from readers proclaiming affection for fermented bean paste. Even Yi @ Yi Reservation, who is a talented cook and food blogger from Sichuan, announced that he loves making the sauce with Sichuan spicy fermented bean paste. All this just proves that there is no one single best way of making zhajiang mian sauce. There can be as many best ways as there are good cooks.

For the potluck dinner at Bob and Evan’s home I made both the pork and the shrimp versions. I served both varieties to all except for the two guests whom I will not name (except to say that I am married to one of them). Suffice to say everyone was sated and contented. 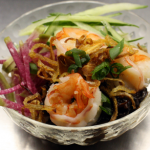