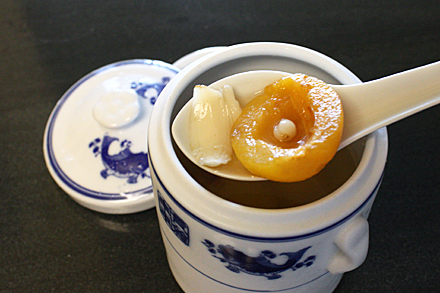 For much of May I suffered from a seemingly endless fit of coughing. This lingering dry cough from a cold has no phlegm but was irritating nevertheless. I went to see my doctor and I was given an unusual prescription with a drawing and instructions. The drawing was of a pear with hollowed center and flames at the bottom. The instructions told me to get some chuanbei (川貝) from a Chinese herbal pharmacy, place it in the cavity of the pear along with some rock sugar, then steam the pear for about 30 to 45 minutes. I followed these instructions and consumed a steamed pear a day for about one week. Miraculously I was rid of the nagging cough.

Dr. Wing Tsang is a Chinese American practicing Western medicine, but he also incorporates acupuncture and Chinese herbal remedies when appropriate. After being highly recommended by many of my friends I started seeing Dr. Tsang early this year. I’ve always been a proponent of eating healthy and using beneficial foods to maintain my well-being. So it didn’t take much convincing for me to seek a consultation with Doctor Tsang when my coughing did not end.

The key to Doctor Tsang’s prescription is chuanbei, which is a Chinese medicinal ingredient known by its Latin name as fritillaria cirrhosa. It is the bulb of a small plant and is used as an expectorant to loosen phlegm and suppress cough. It is also the main ingredient for a Chinese cough syrup called Nin Jiom Pei Pa Koa (京都念慈菴川貝枇杷膏), which I remember growing up as a kid being administered with regularly. As a common remedy it is often cooked with fruits that can counter the slight bitterness.

Although Doctor Tsang’s version calls for pear, which is the most common way to administer the extract from the fritillary bulb, I prefer another version made with loquat in a soup when it is in season. Loquat in its own right has expectorant properties. Combining the two boosts the potency of this remedy. I also add dried lily bulb sections to the soup to create a “cooling” soup with yin properties. The concept that foods have yin and yang characteristics is the main idea in Chinese food therapy for maintaining a balanced healthy diet. A separate discipline has evolved from this concept and is a subject studied by students of Chinese medicine.

To gently extract the beneficial element out of the fritillary bulbs I recommend the use of covered porcelain Chinese soup canisters for steaming. Steaming the soup instead of boiling supplies steady gentle heat to the process. You can find these canisters in many Chinatown markets or gift shops. They come in a few different sizes. I suggest one-and-a-half-cup to two-cup size. These canisters have two covers: an inner insert and another outer cover. Sometimes a paper strip is used as a seal to keep the steam from diluting the content. For this soup it is, however, not necessary.

With the summer in full swing I often suffer from seasonal dry coughs. Instead of reaching for Robitussin I now make my own remedy with fritillary bulbs and fruits. It is natural and delicious. You may want to try this same remedy as well. 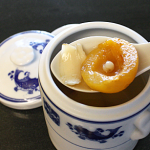