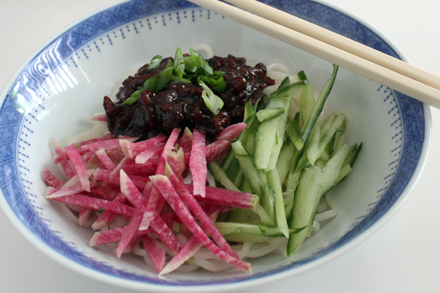 Go to a Japanese noodle shop or a casual Korean restaurant and you’ll find two noodle dishes with very similar names: Jajangmyeon and Jajamen. Not unlike spaghetti Bolognese they consist of a bed of noodles topped with a brown ground meat sauce often accompanied by julienned cucumbers. Few people though realize that this dish originated in China. Known as Zhajiang Mian (炸醬麵) in Mandarin it is a classic snack food from the Beijing region.

Noodle shops specializing in Zhajiang Mian dot the city just like ramen noodle shops do in Japanese cities. Local residents look for the best versions and are fiercely loyal to their favorites. Everyone has their own special way of preparing it. Restaurant owners, or for that matter even home cooks, guard their recipes like treasures. So what is the secret to a good Zhajiang Mian?

The key to the flavor of this dish is the meat sauce that tops the noodles. To make this sauce we start with some finely diced pork belly. Then a bean paste is added along with some water or stock as well as aromatic ingredients like garlic and scallion. The meat mixture is cooked until it is reduced to a thick brown sauce. The bubbling oil towards the end of cooking gives the sauce a slightly smoky burnt flavor. This reduction process gives rise to the name of the sauce as “zhajiang,” which literally means “fried sauce.”

There is, however, an on-going controversy over what type of bean paste makes the best sauce. Diehard traditional Beijingers insist on using the “yellow bean paste (黃醬).” But other people think “sweet bean paste (甜麵醬)” is a better choice. Still others claim that “fermented bean paste (豆瓣醬)” is superior.

To choose my favorite I conducted a taste test. I made a sauce from each of the respective pastes and created a fourth one with a combination of yellow bean paste and sweet bean paste.

I rejected the fermented bean paste outright. The flavor was too overpowering with slight bitterness. It also creates a sauce that is a bit lumpy. When I told my Beijinger friend Robert Zhu, who is the proprietor of Lotus Blue Restaurant Bar, about my decision he promised to share his mother’s fermented bean paste recipe, which I will share with you in a later post. It is a dried shrimp sauce that he enjoys whenever he is home in Beijing.

Tasting the other sauces I found the yellow bean paste alone produced a good rich texture but rather simple in flavor. Yet the sweet bean paste alone was too sweet for my taste. The combination of these two on the other hand resulted in a good balance of sweetness and texture with complex flavor and was my favorite.

In addition to the sauce, traditional Zhajiang Mian is topped with julienned radish and cucumber. Contemporary cooks add other ingredients such as bean sprouts, green soybean (edamame), or carrots.

Everyone else can continue with the battle over the merits of different types of bean paste but I think I’ve found my favorite. I like the compound sauce and I’m sharing my recipe with you. So make Zhajiang Mian with this recipe and let me know if it isn’t a much-improved version of a Beijing classic. 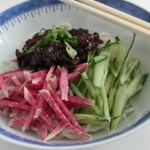