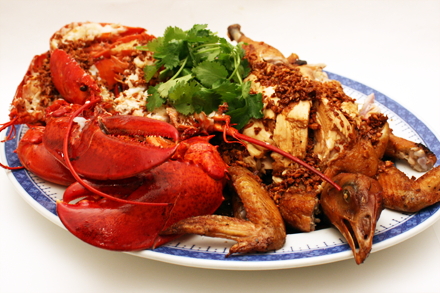 Juggling consulting work at Lotus Blue and other freelance consulting gigs, I almost neglected my own family’s reunion dinner for Chinese New Year. But since we were entering the Chinese zodiac’s dragon year it would have been improper not to have a grand celebration to welcome it. Among the flurry of my activities I staged a sumptuous Dragon Chinese New Year banquet for a small group of family and friends.

Symbolism is important in the Chinese culture. They believe the dragon year is an auspicious one for having a baby, especially a son. In fact the Chinese population is expected to increase by 10 percent during the year. Among my extended family I’ve already received notice from three young couples that they are expecting babies during the year. Perhaps these are just coincidences but I’m tempted to think a high degree of planning was at play.

Symbolism in food is just as prevalent in Chinese culinary culture. The Chinese name for lobster is dragon prawn (龍蝦) and it is very popular to name a lobster dish with a poetic flourish. For the first hot course of the banquet I created a lobster and chicken dish with crisp garlic garnish and called it “Dragon Accompanying Phoenix in Welcoming the New Year” (龍鳳喜迎春).

So here is our Chinese New Year banquet in pictures. Best wishes to all for a prosperous and healthy New Year.