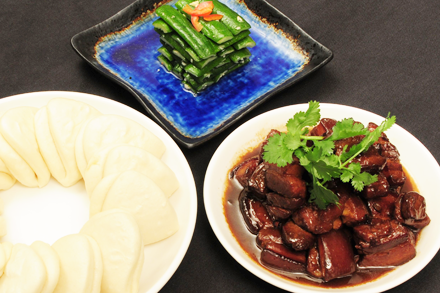 A month ago Sabino from Baltimore submitted a comment on the Red Cooked Pork Redux post. It was a comment like I have never seen before. Not only was it voluminous it was also very insightful. He asked detailed questions on cooking and serving red cooked pork. I’m gratified that my readers are actually making authentic Chinese food and are sharing their experiences along the way. I feel compelled to devote an entire post to address the issues brought up in his comments. So here I am writing my third post on the subject of red cooked pork.

Red cooked pork is an iconic Chinese traditional comfort food akin to meatloaf in an American home. As such there are many different variations and ways for preparing it. Many families have secret recipes that are passed down for generations. So is there a best way to make red cooked pork? No. There are, however, steps and tips that would undeniably produce a better tasting result. So here are my thoughts…

I hope this post clarifies many of the issues arising from making red cooked pork. I want to thank Sabino for taking the time to write his comments. It is this community sharing spirit that makes Red Cook a success. And lets hear it for pork belly!

Save Your Favorite Red Cook Recipes on Springpad

We Have a Winner!