Now that farmers’ market season is in full swing we are spoiled by an abundance of fresh produce. Lettuces, summer squashes and radishes cram the stalls of just about every green market. Sold in a variety of rainbow colors, radishes are especially plentiful, and they’re almost always sold with their greens attached. Most Americans, however, routinely ask the vendors to cut off the greens or they discard them at home. It’s unfortunate because these greens are delicious and nutritious. In northeastern China the slightly peppery leaves are used in many different ways, including in stir-fries, salads and steamed buns.

Poetically known as radish tassels (蘿蔔纓), radish greens are often grown with the intention of harvesting the young, tender leaves before the roots develop. Depending on the season, different varieties of young radish greens are available in markets throughout northern China. In the summer, small red globe radish greens are usually on offer, whereas daikon radish greens come to market during the autumn.

As in America, in China mature radishes are sold with greens attached. But, we almost always save the greens and cook them. A simple, popular preparation is stir-fried greens with garlic. Using the simple stir-fry technique start by frying chopped garlic in some vegetable oil for a few seconds then add radish greens and season with salt and ground white pepper. Stir-fry until they are just wilted. In less than a minute you end up with a deliciously simple vegetable dish.

In Shandong, on the northeast coast of China, a very popular way of using the radish greens is to fold them into steamed buns. When I was in Qingdao last November, these scrumptious little steamed buns were brought out piping hot towards the end of just about every meal. The filling was juicy and full of flavor. Perfect for rounding out the multitude of seafood dishes served during most meals in that region.

When I interviewed Chef Zhou Feng at Fuxin Hotel in Qingdao about the region’s cooking, I learned that the filling was simply made from chopped up blanched radish greens mixed with ground pork and dried shrimp. The mixture is then wrapped in basic yeasted dough and steamed. Following his instructions I developed the recipe below for steamed pork and radish greens buns (蘿蔔纓包子).

You can use greens from any type of radish, or you can also substitute with turnip greens, which are often available in regular supermarkets. In autumn months in New York’s Chinatown I can occasionally find the young tender daikon radish greens; if you find them, choose them. Whatever type of greens you use, select those that look tender with light green color lest they should be too fibrous.

All this to say, don’t discard radish greens anymore. Not only will they offer you nutritious food but they also help reduce waste while saving money. Think of eating radish greens as virtual dumpster diving. 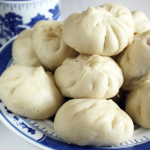