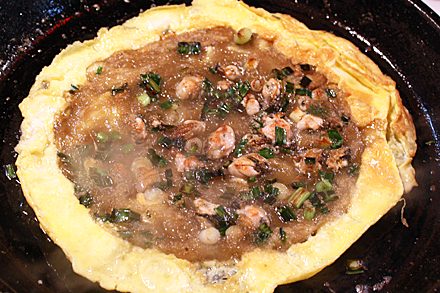 Two weeks ago Warren and I left Shanghai’s Hongqiao International Airport bound for Xiamen (廈門), a major southern port city of Fujian (福建) province where my ancestors are from. The first thing I noticed onboard our Xiamen Airlines airplane was that the pre-flight announcement was in the Southern Min (閩南) dialect that I spoke with my grandparents. During my travels in China over the last decade I’ve never heard any local dialects used in such official announcements. So this was surprising to me since China’s central government pretty much dictates people’s life including the language used for official or business purposes. I knew then that I was about to witness a very different independent minded part of China. This spirit probably helps explain their unique culture and cooking customs as well.

Known as Min (閩) cooking, the cuisine of Fujian is one of the eight main cuisines of China. Being a coastal province the food is characterized by an abundance of local seafood ingredients. It is also shaped by the people from two major waves of central Chinese migration. The first wave was a group of retreating imperial families and their households from the Western Jin Dynasty (西晉) during its waning years early in the 4th century CE. The second was during the period after the collapse of the Tang Dynasty around 9th century CE when again the defeated people moved to the relative safety of the coastal region. These people brought with them their cooking techniques, and adapting to local ingredients created a unique seafood-based cuisine. They also brought with them the defiant and resistant characters to their culture.

Although not very well known in the U.S., Min cooking holds a major place in Chinese cuisine. Among the many fine dishes of the cuisine two are celebrated as banquet delicacies. The first is a soupy stew of very expensive seafood cooked in a compound meat stock. The seafood ingredients include shark fin, sea cucumber, abalone and dried scallop. These are highly desired expensive banquet items. The stock, made from pork, chicken and ham, is so rich that, combined with the seafood, the dish exudes incredible aroma and has intensely complex flavors. The dish is called Buddha Jumps Over the Wall owing to the legend of a traveling monk who was so overcome by the smells that he jumped over the wall of his wayside inn and abandoned his vegetarian diet just to savor this dish.

The second dish is Lychee Pork, in which pork tenderloin is cut into lychee-shaped pieces before being cooked and coated in a sauce of red wine lee. The dish gets its name from its semblance to lychee fruit. But there is no actual lychee in the dish. It has a delicately sweet and sour flavored sauce and is usually served in a fanciful presentation to resemble a bunch of lychee.

Like everywhere in China what really characterizes a cuisine though is often the common home cooking and snack dishes. In Xiamen one of the most representative snacking dishes is the oyster omelet. Growing up in Singapore I remember this dish being a favorite in the many hawker centers throughout the city. The omelet is made with small thumbnail-sized Chinese oysters. First they are mixed into a sweet potato starch batter and fried into a pancake. Then a beaten egg is spread around the pancake to make it into an omelet. Finally pieces of garlic chive and scallion are scattered over the omelet and a sweet chili sauce is splashed on top before eating. It is a truly rustic snack with a taste of the sea.

I grew up eating this oyster omelet as well as many other home-style Fujian dishes. Visiting Xiamen and encountering these same dishes gave me a comforting sense of familiarity. I’m moved by the fact that even though I’d never been there before, visiting Fujian felt like going home. 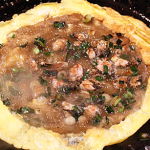