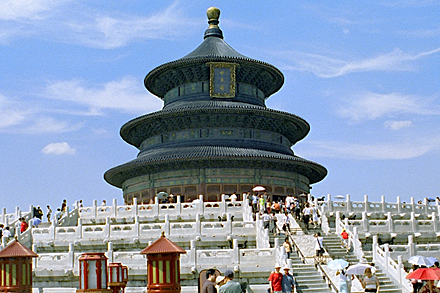 Mention Beijing cuisine and Peking duck immediately comes to mind. It conjures the image of sumptuous palace fare and complex cooking techniques. This dish is considered the ultimate of Chinese cooking wisdom and knowhow. Perfectly roasted duck with a lacquer-like glaze covering the skin is the definitive Beijing delicacy prized by connoisseurs. But one would be hard pressed to find another dish from Beijing cuisine that stands out like the duck.

As part of my book research tour to China this spring, I visited Beijing to learn about its cuisine beyond Peking duck. Chef Alan Yang, chef de cuisine at the Fairmont Beijing Hotel, took me into his kitchen to talk about his native cuisine. There we chatted about the two types of cooking that coexist in the capital: palace cooking and common people’s cooking.

Beijing cooking according to Chef Yang was originally based on that of neighboring Shandong province. When the Manchus invaded from the north to establish the Qing Dynasty beyond the Great Wall, they brought their own cuisine with them. But not satisfied with their own simple cooking, the Manchus introduced Han food preparation from southern provinces as they expanded their control in the south. Palace cooking then evolved into a blend of the cuisines from around the empire using many of the exotic ingredients offered to the palace from local warlords and nearby vassal states. Even now the people of Beijing continue to enjoy foods from all over China. In fact most of the better restaurants in Beijing offer Cantonese, Sichuan or the cuisine of other provinces.

To get a better understanding of Beijing cooking one has to also examine the food of the commoners. Very few traditional home-style restaurants remain. My friend Sita, who currently lives in Beijing, helped me find one in her neighborhood. It is called The House of Jomo and I talked with the owner, Lu Dan, and the chef, Liu Kai Feng. Although the menu has a strong Sichuan influence I was offered a few dishes that Chef Liu considered to be traditional Beijing cooking. Among them are two appetizers I found interesting. They are pig skin and beans in aspic (老北京豆醬) and cold braised carp (五香酥魚).

The aspic was made by simmering pig skin in aromatic spices and soy sauce. The liquid produced is then filtered, and slices of the cooked pig skin, soy beans, edamame, peanuts and carrot cubes added. After being cooled and solidified into a jelly, it is cut into cubes and served with black vinegar. The result is an incredibly flavorful jelly with soft tender pig skin and slightly crunchy beans. It has to be one of the most complex flavored aspic dishes I’ve ever tried.

If the pig skin and beans aspic is a study of complex techniques, then the cold braised carp is the model of simple cooking. It is made from a traditional Chinese crucian carp and is braised for more than five hours over very low heat in a liquid of soy sauce, vinegar and spices. By the time the fish has finished cooking the bones are so soft they can be eaten. This dish is absolutely delicious paired with Chinese rice wine.

Like the majority of food eaten by the common people in Beijing, both of these dishes are basic and simple. No one would imagine serving either of them in the palace. It is not surprising then that palace cooking even during the dynastic period developed from dishes imported from other Chinese regions rather than from the local traditional cooking. A true Beijing cuisine exists only from the simple local cooking of the commoners. 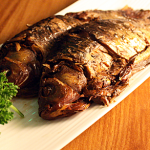