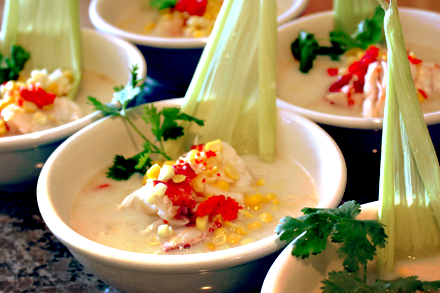 Every summer when the weather gets sultry my partner, Warren, who is a “Swamp Yankee” with family directly descended from the Mayflower Pilgrims, gets nostalgic and yearns to get in touch with his roots. This year is no exception and last week we spent an extended weekend in Provincetown to indulge in his nostalgia. Throughout our stay we drove around Southern New England and ate wonderful shore dinners and other scrumptious meals at restaurants all over Cape Cod. We gorged ourselves on fish and chips, lobster rolls, clam cakes, stuffed quahogs and fresh sweet corns. By Sunday I was lusting after the fresh seafood and local farm produce, and decided to make a shore dinner but gave each course an Asian twist.

Our friends, Matt and Jun, hosted us at their beautiful house in the West End section of Provincetown. The house has a dream kitchen that extends out to a patio, where a charcoal grill sits invitingly. It was not difficult for me to decide to make a grilled seafood main course. Skewered cod, blue fish, scallops and summer vegetables were grilled and glazed with a chili sweet and sour sauce. I adapted the glaze from a Singaporean chili crab recipe but toned down the heat and enhanced the sweet and sour character.

To accompany the main course I created an iceberg wedge salad with a peanut butter and sesame dressing. This salad was inspired by a spicy Sichuan salad of sesame paste served over Chinese lettuce. I made this dressing with peanut butter base instead and flavored with toasted sesame oil and lemon. It tasted extremely refreshing on the cool iceberg lettuce.

For the starch dish I made a very simple fish sauce fried rice. This dish was based on the simple Chinese egg fried rice (蛋炒飯); a staple of many Chinese home cooked meals. The pungent fish sauce created a vivid taste of the seashore.

Given Warren’s long New England family background, he often requests that I include traditional dishes he grew up eating. But my creative nature often trumps his insistence. This time was no different. Instead of serving the traditional New England clam chowder I created a coconut milk based chowder with lobster and corn to serve as a starter. It was made with a stock of lobster, lemongrass and ginger. As it turned out the chowder was the star of the dinner. Even Warren conceded that it was a winner.

Ice cream is the only choice to end a meal in such warm weather. I made a ginger flavored syrup that was used to macerate finely cut up mangoes. This compote of mango was served over vanilla ice cream, making it the perfect ending for a hot summer Sunday dinner. This year not only did Warren get to rediscover his roots but I got to infuse some Asian influence to the tradition. 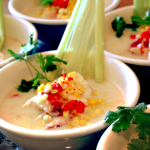