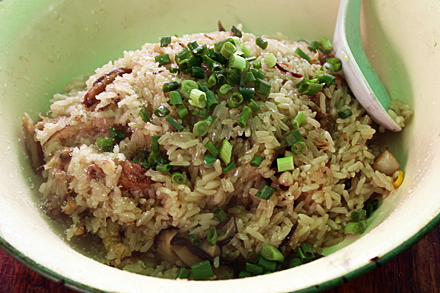 Growing up in Singapore I often chatted with my grandfather about Jinjiang (晉江), our ancestral hometown in Fujian (福建) province of China. The stories he told painted a picture of a fishing village with a thriving commercial center where our ancestors lived and worked as merchants and traders. So imagine my surprise when I learned that Jinjiang is now a city with a population of one million.

Still a busy fishing port, Jinjiang has become the largest center of underwear and swimsuit production in all of China, and by extension the whole world. That is the product of economic liberalization over the last three decades. But what interested me the most was investigating the local foodways. Would I be able to find the comfort foods of my youth in Jinjiang? Would the different kinds of flavored rice, fish balls, angel hair noodles and fresh spring rolls be the same?

During my book research tour of Fujian last month I got my chance to find out when we were invited to accompany Ben, our host in Jinjiang, to a funeral lunch hosted by the family of one of his friends. These lunches are offered to friends and extended family members, who come to pay their respects to the deceased during one of the three days of a traditional Chinese funeral. I was excited by this opportunity since I knew the meal would be comprised of local rustic dishes.

Funeral lunches in Fujian are routinely attended by fifty to sixty people, so a tent was set up in the alley in front of the grieving family’s home. We arrived early to watch the caterer prepared lunch behind the tent. A large steamer was already set up to heat the pre-cooked dishes in addition to two large woks sitting on top of wood stoves for cooking rice. Lunch included sweet and sour braised fish and tofu, fresh abalone and daikon soup, pork intestine and clam soup, fish balls and cucumber soup, and most importantly for me seafood-flavored sticky rice.

This rice dish made from a combination of dried oysters and shrimps, peas, corns and shiitake mushrooms is one of those comfort foods that I regularly crave. It has the recognizable seafood and shiitake aroma that can easily make me salivate. At home we cooked the rice in a rice cooker or steamed it in a bamboo steamer. But here the rice was cooked in large woks over wood burning stoves. The caterer swore that the intensely hot blazing logs in the beginning followed by the gentle heating of the resulting embers cooked this rice dish perfectly. So I watched him closely as he stoked the wood and expertly controlled the heat to make the perfect seafood-flavored sticky rice.

After chatting for an hour about local cooking traditions and techniques with the caterer we sat down for the noon meal. Happily I discovered that my family did follow Jinjiang cooking customs very closely. All the meal’s familiar flavors carried me back to my childhood. Although the fishing village may have grown into a large industrial city, it’s nice to know that its culinary flavors remain unchanged. 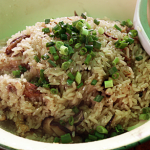