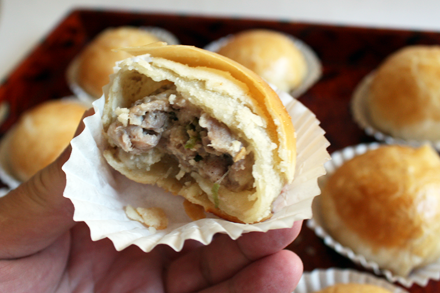 A few years ago I happened to be in Shanghai during the Mid-Autumn Moon Festival. Normally during this time of year families come together for reunion dinners. But a few of my expatriate friends from Singapore and Malaysia, and I were posted in Shanghai without our families. So we gathered up a group and celebrated the festival at a Shanghainese restaurant. As we ordered our meal the waitress suggested we try some pork mooncakes. That was the first time I tasted a savory mooncake.

This curious little round pastry is made from a flakey wrap that encloses a ground pork filling made with aromatic seasonings tasting almost like meatball. The restaurant claimed these pastries originated in Shanghai. But I later learned from a friend from Suzhou (蘇州) that in fact they originated from Yangzhou (揚州) in Jiangsu (江蘇) province near Shanghai. Although no one really knows when they were first introduced, they have become so popular around the Yangtze River delta region that major cities in the area claim they are indigenous.

For me it is refreshing to taste a mooncake with savory filling. Even though there are many sweet mooncakes made with pastry wrapper, the pork filling creates a different quality to the pastry. Like they have with sweet mooncakes, many bakeries have become innovative with the filling and have created many variations such as pork and pickled turnip, and pork and ham.

I have included a recipe for traditional pork filled mooncake below. Unlike sweet mooncakes, which can be made ahead and stored for later consumption, this pork mooncake should be served immediately. In fact it is best served piping hot straight out of the oven. They can be stored in the refrigerator overnight but the pastry will loose its flakiness after reheating.

This year my schedule just before the Moon Festival has been absolutely crazy. I’ve not been able to publish a single blog post for a month. My attempt in making some traditional mooncakes in a rush as gifts failed miserably. So I am making savory pork mooncakes at the last minute for our family reunion dinner. 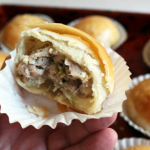 Strengthen Your Kidneys with Mountain Yam and Fox Nuts