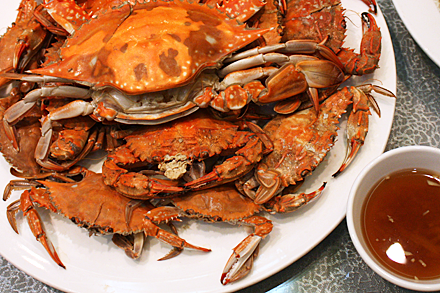 Across a very narrow strait from the downtown waterfront of Xiamen (廈門) sits the island of Gulangyu (鼓浪嶼), a hilly outcrop smaller than Central Park in New York City and dotted with colonial-era European style buildings. Warren and I took the short five-minute ferry ride to this island last month while we were in Xiamen. Gulangyu occupies a very special place in my heart because my father spent his formative years there attending the Anglo-Chinese Middle School in the 1930’s.

My grandfather, who emigrated from China to Indonesia at the turn of the 20th century, sent my father back to Fujian to get a quality education. My father fondly remembered the tranquil island where he studied with many other overseas Chinese students. All the while living a carefree young boy’s life, skipping classes to go swimming on the beautiful beaches and climbing up trees after being chased by stray dogs he and his friends had harassed. Going to Gulangyu for me brought back memories of stories my father told me.

After arriving at the island we wandered through narrow roads and winding lanes on foot as the island remains devoid of motorized vehicles. Lining the tree-covered roads are grand mansions now in varying states of dilapidation, some hidden behind tall walls with overgrown gardens and others situated smack on hills overlooking beautiful sandy beaches. These are remnants of China’s painful bygone colonial-era when foreigners occupied Gulangyu.

On August 29, 1842 the Treaty of Nanking was signed between the United Kingdom and the Qing Dynasty of China. This first of a series of treaties, commonly known as the Unequal Treaties to the Chinese, opened up five ports in southern China to foreign trade as well as ceded the sovereignty of Hong Kong Island to the U.K. Xiamen, then known as Amoy, was one of the five treaty ports. Almost immediately foreigners started settling on Gulangyu opening consulates and building houses for their trading businesses and families. In 1898 Gulangyu officially became an international concession jointly administered by nine different nations. It remained so until 1930 when the new Republican Chinese Government annulled the concession agreement and re-exerted control over the island.

While the foreign merchants and traders were operating lucrative businesses on Gulangyu, British Protestant missionaries were active in proselytizing the locals as well as offering them education and health care. They founded the Anglo-Chinese Institution (英華書院) as a progressive English language school. In 1924 the school administration officially registered it as a Chinese language school and changed the name to Anglo-Chinese Middle School (英華中學). After the Communist takeover the school was renamed Xiamen Middle School No. 2 in an attempt to erase vestiges of the colonial era.

The school, located up a steep lane on a hill, is enclosed behind tall walls. Warren and I found the gate and after I convinced the school administration that my father was in fact a student there we were let in. Walking up the path from the gate with a school administrator I immediately recognized the running track down the hill on the left and the quadrangle with classroom buildings in front of us from vintage photographs I found researching the school. But the buildings didn’t look familiar and were replacement structures built in the 1970’s. Our guide told us there were only two buildings left standing that had any semblance of the old façades, and both were currently under renovation and enclosed within construction netting. Needless to say I was disappointed by the appearance of the physical campus, but I imagined being a young boy studying in this campus within colonial buildings, and daydreaming of the fun one can have just outside the campus full of food stalls and bustling markets.

With the goal of visiting my father’s school accomplished, it was time to explore the food scene just as we do everywhere we go. A few blocks down the hill from the school is the commercial quarter of Gulangyu. As we turned the last corner the serenity of the school and the residential quarter gave way to the hustle and bustle of the tourist shops and food stalls. Vendors barked towards the crowd peddling just about every kind of local food. There were oyster omelets, Fuzhou fish ball soup, braised pork noodles, grilled shellfish, grilled quail, baked pork buns, steamed pork dumplings and other unrecognizable items.

One of them displayed a sign that said “Sand Shoots Jelly” (土筍凍). Served in a small clear plastic cup, flattened greyish-white strips of something were embedded in a clear gel. This was topped with shreds of cucumber and pickled daikon and covered by a sauce looking like brightly colored chili oil. In spite of its benign appearance it tasted absolutely vile. It became worse when I discovered that the “sand shoots” were really a euphemistic term for sea worms. I was even more revolted when I found a video on-line showing how the jelly is made. This dish is truly worthy of its own episode on Andrew Zimmern’s Bizarre Foods show.

To eliminate the terrible aftertaste of the jelly I turned to one of the island’s delicacies: steamed crabs. Mud crabs are plentiful in the waters off Fujian’s coast, so they have become a specialty of the region. These steamed crabs are served simply with a ginger vinegar sauce. That’s all that’s needed to bring out the flavor of this fresh sweet meat of the sea, and to cleanse the sea worm jelly’s lingering taste.

Gulangyu is now a tourist mecca with hundreds of thousand visiting every day. Unlike other tourist spots in China it has not been overly developed. For now most of the old colonial buildings are still intact, albeit needing lots of renovation. My father probably would still have been able to recognize most of the island. But he fled Gulangyu in 1938 to return to Indonesia just before the arrival of the invading Japanese army. He would never return to Fujian again before his death in Singapore in 1985. As for me, I finally made my pilgrimage to our ancestral province last month and shared a part of my father’s youth. 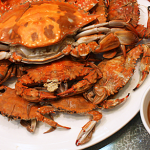