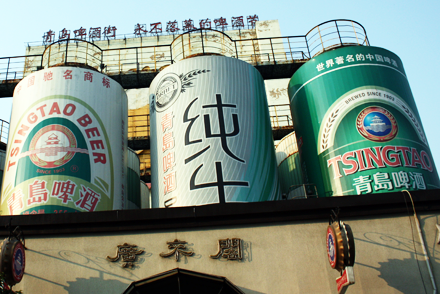 My flight arrived late last Wednesday night into Qingdao (青島) over a crisp clear autumn sky. The brightly lit skyline of Qingdao, a city in the northeastern Chinese province of Shandong (山東), appeared over a dark coastline of the Yellow Sea (黃海). I was very glad to be sitting on the right side of the cabin as it offered a full view of Qingdao city through my window. My excitement increased as we descended into Qingdao Liuting International Airport. I was about to visit the hometown of the legendary Tsingtao beer.

I am in Qingdao for the first time by the invitation of Mr. James Tang of M & T Restaurant in Flushing. He is guiding me in my quest to learn about Shandong and Qingdao cuisines. Last Friday I visited the Tsingtao Beer Museum and was completely blown away by the excellent preservation of the original brewery. The buildings are completely intact with the original equipment apparently still capable of brewing beer. These buildings are now open to the public and offer a glimpse of the history and production process of the company. Going through the exhibits I was struck by the incredible fact that the brewery continued to produce excellent beer throughout the political turmoil that was China in the 20th century.

Go to any Chinese restaurant in the world and you’d be hard pressed to find one that does not serve Tsingtao beer. It is the beer of choice for many diners in Chinese restaurants regardless of the regional cuisines. The refreshing pilsner compliments spicy Chinese dishes beautifully. Yet when the brewery was first started in 1903, the company was concerned that local Chinese consumers would not embrace it. So the beer was marketed mainly to other European settlements in China and for export to other Asian countries.

The original brewery was started by English and German investors from Hong Kong. Known as Germania-Brauerei the company built the brewery with the then state of the art equipment supplied by Siemens of Germany. Qingdao had just been transformed from a small fishing village into a port city within the Kiautschou Bay concession seized by the Germans from the Qing dynasty in 1898.

The company located the brewery on the eastern edge of the city, and started producing pilsner in 1904 using imported grains, local hops planted right outside the brewery, and water brought from the springs in nearby Laoshan (嶗山) mountain, which at the time was a pristine source for water. These ingredients, along with skilled brew masters from Germany, created a pilsner that was marketed under the Germania brand, and immediately won a gold medal at the Munich International Exhibition in 1906.

What followed is like a history lesson in modern China. During World War I the Japanese occupied Qingdao when Japan declared war on Germany and allied itself with England. After the war the allies failed to return Qingdao to China and triggered the May Fourth Movement by Chinese students against the Japanese occupation. In 1916 Germania-Brauerei was forced to liquidate and the brewery was sold to Dai-Nippon Brewery. The Japanese owner started selling products under the Asahi and Sapporo brand.

Although Japan returned Qingdao to the Republic of China in 1922, the brewery continued to be operated by the Japanese. In 1938 Japan once again invaded Qingdao and occupied it until surrendering in 1945 at the end of World War II. Ownership of the brewery briefly belonged to the Tsui family for a few years before being nationalized shortly after 1949 following the Communist’s victory.

Renamed Tsingtao Brewery it continued to brew excellent beer even during the tumultuous decades right after the Communist victory. With the opening of the Chinese economy the brewery was privatized in 1993 and was listed on the Hong Kong stock exchange.

The story of Tsingtao beer is an extraordinary tale of a company surviving political and business turbulences and succeeded. Given the unpredictable developments that will inevitably accompany China’s progress during the next few decades, I suspect the story of Tsingtao beer will continue to be intriguing and I expect the beer to remain award winning.

Learning Sichuan Cooking at the Source