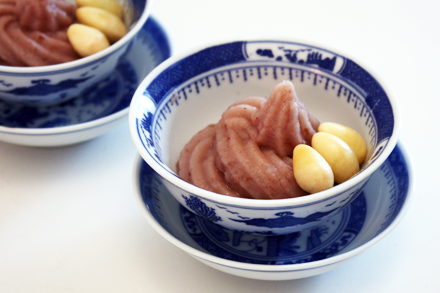 I have a New Year resolution, a Chinese New Year resolution that is. I am going to eat healthier from now on. No I’m not going to seek fat-free products on market shelves, nor am I going to reduce the fat in my cooking. I plan to use natural animal and vegetable fats in my cooking. Yes, that’s right I am not going to shy away from either natural animal fats such as lard, tallow and organic butter, or natural vegetable fats such as coconut oil, olive oil and grapeseed oil. As it turned out these fats are not necessarily harmful to your health; in fact they are often essential for your body. Besides they are delicious!

For many years we’ve been told to reduce the intake of saturated animal fat in our diet. This advice originated from studies in the 1950’s linking heart diseases to high saturated fat consumption. What happened next was that hydrogenated vegetable oils were introduced and promoted as animal fat substitutes by the vegetable oil processing industry. The conventional wisdom was that vegetable oils, which are full of unsaturated fat, are better for us. Unfortunately the hydrogenating process introduces trans-fat into the product, and they have been implicated in the increase of heart disease incidents during the last half-century.

Now many researchers are having second thoughts because new studies indicate that natural animal fats can be beneficial to our health. There is now a movement to re-introduce natural saturated fats back into our regular diet. The emphasis is on natural because many commercial products made from saturated fats have been hydrogenated to make them shelf stable, hence making them unhealthy.

Ideas about many saturated vegetable oils have also changed. Coconut oil and palm oil have been proven to be quite beneficial for our health. Thus with open mind I am resolved to start incorporating these natural saturated fats back into my cooking. What better way to celebrate the return of lard than making taro paste (芋泥). This is a Chaozhou (潮州) dish that is made from taro and lard. I remember restaurants in Asia serving this sweet dish with a thick layer of melted lard swimming on top. We all used to squirm at the notion of eating it but I’m glad I can now enjoy this dish without guilt.

Key to successfully making this dish is the use of fresh natural lard. It is now possible to purchase natural lard from a few retail markets as well as directly from the farms. One of my favorite farms is Flying Pig Farm, which sells their products online and at the Union Square Farmer’s Market in New York. From them you can buy leaf lard, which is considered by many to be the best pork fat for rendering, either raw or already pre-rendered.

Rendering lard is a very straightforward process. First grind or chop the fat, then cook under very low heat until the fat is completely rendered. When all the fat is rendered strain it through very fine sieve or coffee filter. You can also add a little water during the rendering process to prevent the fat from burning. But in Chinese cooking the lard is often rendered at high heat creating a smoky nutty taste.

I believe consuming a good balance of natural non-processed foods is important to a healthful diet. Eating moderate amount of saturated fats should be part of that balance. So, this New Year I urge you to go ahead and enjoy the lard you’ve feared for many years. Happy New Year!