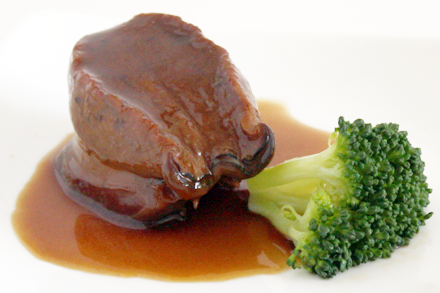 During the winter months for the last two years I started noticing fresh frozen abalones for sale in New York City’s Chinatown. A few fishmongers display mounds of these large solidly frozen mollusks. I was curious where these abalones come from. Unfortunately most of the shopkeepers were not able to enlighten me. However one person suggested Australia, which is plausible since abalone farming has become very successful there. This success has made abalone a sustainable ingredient. So this year when I was planning our Chinese New Year family celebration I did not hesitate to include some of these beautiful abalones for the Hakka dish DaPenCai.

DaPenCai (大盆菜), literally translated as “big basin meal,” consists of many individual dishes presented in layers in one large platter. The individual dishes often include abalones, sea cucumbers, prawns, scallops, chicken, duck feet and other delicacies. Traditionally it is served among the Hakka families on the fifteenth day of Chinese New Year to mark the end of the holiday. DaPenCai is now served at anytime during the fifteen-day period of New Year festivities, and also throughout the rest of the year.

This year my family’s Chinese New Year dinner banquet celebrates Hakka (客家) and ChaoZhou (潮州) cuisines, so I’ve included DaPenCai as one of the courses. The Hakka people migrated to southern Chinese coastline after escaping political persecution in the north. They eventually settled around northern Guangdong and southern Fujian provinces right near the ChaoZhou area. Overtime their cooking traditions influenced each other and they now utilize many similar ingredients and techniques.

In my plan for the DaPenCai I included Braised Abalone (原汁燜鮑魚) as one of the items. This version I’m making is an uncomplicated braising of the mollusk in a soy sauce based liquid. I’m also using pork and chicken, as is traditional, to create the rich umami that flavors the abalone.

Abalone is available in the market live, fresh frozen, canned and dried. For many years the dried and canned varieties were the only ones available. Now with so many choices which one makes the best braised abalone? I used to consider the reconstituted dried abalone to be the best because of their deeper richer flavor. But I now believe fresh abalones, whether live or frozen, are the best choice. Their texture is tender and they produce a fresh delicate flavor.

I will publish the full banquet menu in the next post. But here is the recipe for Braised Abalone. Enjoy the recipe and Happy New Year! 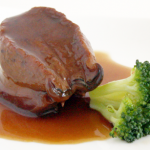