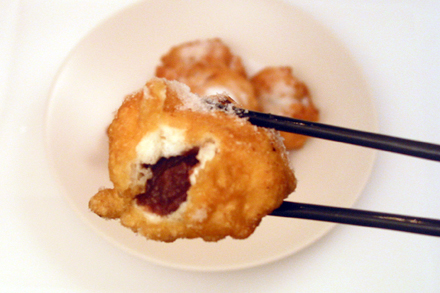 I worked on a stir-fry technique post just before Chinese New Year, and was hoping to post it right after the banquet post. But the response to my red bean paste meringue dumpling, or Gao Li Dou Sha (高力豆沙), was so overwhelming that I decided to replace that post with a recipe for the dumpling instead.

I was rather surprised by the response to this sweet dish. My prior experience with serving red bean paste was not always very successful. Perhaps the manner it was served had something to do with it. The concept of fried dough is very familiar to the American palate. However, there is a surprise when one bites into it. The hot steamy center with earthy bean fragrance, plus the crisp elastic dough together create a completely new sensation. Traditionally there is no dessert concept in Chinese cuisine, and meals regularly end with a fruit course. As Western influence enters into Chinese cooking many people are beginning to include sweet snack food at the end of a meal. Snack food (點心, 小吃) is a very well established cooking style in Chinese cuisine that includes savory and sweet dishes in small servings. The best known of all is the Cantonese Dim Sum. Gao Li Dou Sha, originally a snack dish from the Beijing area, is now commonly found in restaurants as dessert.

The secret to making Gao Li Dou Sha is good meringue batter. A good proportion of flour and starch in the egg white results in an elastic and yet moist wrapping for the dumpling. Just like other risen egg white dishes such as soufflé, Gao Li Dou Sha should be served immediately after frying before the meringue collapses and the crispiness expires.

Red bean paste is made from azuki bean and is widely used in Japanese and Korean dishes as well. Sometimes I make it from scratch at home, but more often I use commercially available canned red bean paste bought from Chinatown. Of course the homemade version has superior flavor and a nice coarse texture, which reminds me of the difference between homemade lumpy mashed potatoes and potato buds. (I may create a post on making homemade red bean paste in the future.) 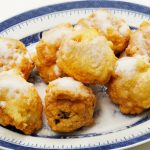 I hope you enjoy this sweet dish as much as our guests at the Chinese New Year Banquet. It is not a very complicated recipe but does require nimbleness during final cooking. Come back to tell me how you fare after you’ve made it.

Why I’ve Been Making Mooncakes