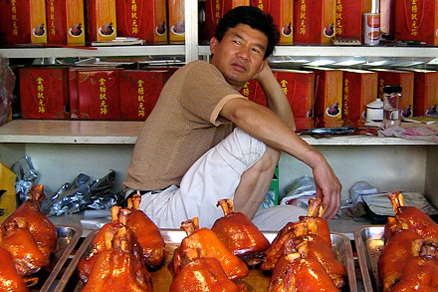 Last Saturday Fred Ferretti wrote in a New York Times editorial about the poor state of Chinese food in America. Similarly last June Tim and Nina Zagat wrote an editorial, also in the New York Times, regarding the sorry state of Chinese restaurant food in America. These editorials highlight my biggest Chinese cooking complaints in America: 1) American public does not have good understanding of authentic Chinese food. 2) American food writers are not familiar enough with Chinese ingredients and techniques to write about them. 3) We always end up with writings about Chinese cooking with a fusion twist. How can you appreciate the play on fusion cooking if you do not even understand the bases?

I would like to be a little philosophical today, if you allow me, and discuss some of these issues. I think there is a sudden confluence of factors that is making interest in Chinese food a current and urgent matter. One single most important factor I believe was the opening of China itself, making it possible to import ingredients and cooking knowledge.

Another factor, which is really the result of this opening, is the increasing exposure of Chinese food to Americans working and traveling in China. Furthermore, the opening of Chinese society itself also made it possible for many Chinese chefs and home cooks to revive the long revered culinary traditions from different regions.

The California railroad workers first introduced Chinese food to the American public during the early twentieth century, as mentioned in both editorials of the New York Times. Travel across the Pacific then was a long and arduous journey. Consequently ingredients for Chinese food were practically unattainable. The result was Chinese food made with substituted local ingredients, as well as rudimentary cooking techniques practiced by the workers.

What exacerbated the problem even further is the closing of China during the thirty years or so period after the Second World War. Other Asian cuisine enjoyed widespread adoptions during that time, as Americans were beginning to travel overseas regularly and getting exposed to their cuisines. Unfortunately exposure to authentic Chinese cooking then was limited to food in Hong Kong and Taiwan. It wasn’t until the reform by Teng Xiaoping in the 1980’s when the resurrected Sino-American commerce began to supply local Chinese markets with increasingly more varieties of Chinese food ingredients. Unfortunately these markets are located in Chinatown or areas where there are high concentrations of Chinese population. The regular markets serving American public are still trapped in the chop suey and chow mein era. We must educate these grocers and demand that some basic authentic Chinese ingredients be made available. At the very minimum the ingredients from the Starter Kit I posted a few weeks ago should be made easily obtainable.

I completely agree with the Zagat’s editorial that Chinese cooking knowhow should be allowed to enter the U.S. by granting more visas to qualified chefs. We will not be able to advance the acceptance of authentic Chinese food without proper cooking knowledge. These knowhow can exist in the form of better restaurant food, and better media coverage just as Fred Ferretti suggested in his editorial. Regional Chinese cooking has been enthusiastically revived in recent years in China. Many chefs in restaurants, as well as home cooks, are going back to their family traditions and recipes. This is a very exciting moment for Americans to learn about these regional cooking. Contrary to many debates, there are indeed eight widely accepted major regional Chinese cuisines (中華八大菜系): Lu (魯 Northeast China), Hui (徽 Anhui), Su (蘇 Jiangsu), Zhe (浙 Zhejiang), Yue (粵 Guangdong or Canton), Min (閩 Fujian), Chuan (川 Sichuan) and Xiang (湘 Hunan). Sadly ethnic divides also tinge this list because it does not include many of the minority people living in the Western, Southwestern and Inner Mongolia areas of China. This is the list of the Han (漢) people, who dominates China demographically and politically. Though one could argue that those minority regions should probably not be part of China. But that’s a separate political issue.

During the last few years I noticed increasing number of Chinese food blogs actively discussing their regional cooking. I encourage those who are able to understand and translate Chinese to share what they can learn from these blogs. I am doing my part. I call on all Chinese cooks professional or amateur to help spread their Chinese culinary knowledge.

What can you do? I urge everyone to make the effort of starting to cook authentic Chinese food. I will be posting more recipes here and they are all very practical in the American kitchen. You should also demand your local grocers to start stocking authentic Chinese ingredients beyond the customary soy sauce and hoisin sauce. Then come back and report your experience on this blog. Together we can help improve the state of Chinese food in America.

No Bones About It