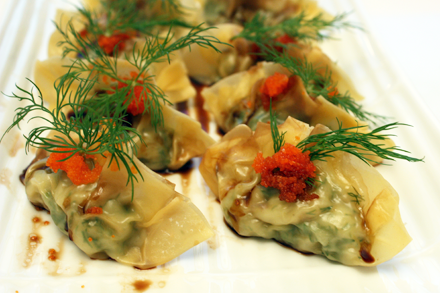 We usually plan our New Year’s Eve early. We would arrange to join friends for a dinner celebration either at a restaurant or at home. This year, however, with my busy travel schedule to Asia in November and December, hosting our family Christmas celebration and organizing Warren’s 60th birthday party we found ourselves without a plan. Fortunately, a neighbor suggested we join them and their friends for a late night champagne and h’or d’oeuvres gathering.

Grateful that we need not have to ring in the new decade by ourselves, I offered to help with the food. The hostess is planning finger food for the party, so I immediately considered making dumplings. They are excellent party food because they can be prepared in advance and kept warm in a steamer until ready to serve. They can also be served on a platter with decorative wooden picks for easy handling. As it turned out the produce section of the Pathmark store across the street is stocked with beautifully fresh bunches of dill this week. They reminded me of a northern Chinese dumplings made with dill and pork filling with a fresh flour dough wrapper. Called dill jiaozi (茴香餃子), they are usually boiled and served with a vinegary and gingery soy sauce.

Instead of making the common pork based dumplings I decided to transform the dill jaiozi into Cantonese style steamed dumplings (蒸餃). I use Dungeness crabmeat instead of pork and substituted commercially made egg noodle wrappers for the fresh flour dough. I pre-cooked the dumplings and will bring them to the neighbor’s in the bamboo steamers they were cooked in. While guests are arriving I will keep them warm over very low simmering water.

As a last minute addition for a New Year’s Eve party I think these dumplings are going to be a hit. The crabmeat paired with fresh dill will create an unexpected taste sensation, and along with the flying fish roe and dill sprig garnish will be an elegant way to celebrate the New Year!