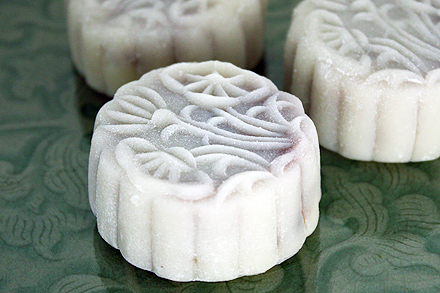 I walked into the K-Mart store near Penn Station in New York last week and discovered to my horror that the Christmas section is already fully stocked with artificial Christmas trees, holiday decorations and ribbons. I had to check the date on my New York Times to make sure I had not completely missed Columbus Day, Halloween and Thanksgiving. This senseless commercialization sent shivers up my spine.

Just like Christmas in America and the West, Asian merchants have learned the art of commercializing holidays. I was rather surprised, though not completely unexpectedly, to find mooncakes being marketed all over Asia as I traveled in August even though Mid-Autumn Moon Festival (中秋節) is not until October 3rd. From Kuala Lumpur to Hong Kong and Singapore to Shanghai, neighborhood bakeries as well as multi-national food chains were touting their specialty mooncakes in advertisements as well as by shelf talkers in their stores.

With the pressure to commercialize the Moon Festival comes the need to produce exotic and innovative mooncake products. I can still remember when buying mooncakes was simply to choose between single or double yolk lotus seeds paste filling cakes. Or very rarely more adventurous shoppers might find a few other types of mooncakes filled with bean paste or sesame paste. But walk about the shopping malls on Orchard Road in Singapore now and you are confronted with an infinite variety of mooncakes for sale. But nothing beats the creativity of a Hong Kong lifestyle merchant GOD. Last year they started marketing a line of “moon” cakes in the shape of four buttocks at various stages of exposure. You may already know that the Moon Festival is celebrated on the 15th day of the 8th month of the Chinese lunar calendar. But you may not know that “15th day of 8th Month” also means the buttocks in the Cantonese dialect. Playing on a multi-lingual pun GOD created an irresistible concept. The “moon” cakes were so popular that this year they’ve expanded the line to eight designs.

In 1989 the Taipan bakery in Hong Kong introduced mooncakes made with a snowy white soft wrapper and filled with different fruit flavor pastes. The mooncakes were delicate with white translucent wrappers that mysteriously displayed a hint of color from the filling. Not only were they beautiful they were also delicious. They called their new creation “snow-skin” mooncakes (冰皮月餅). These cakes were such a sensation other bakeries quickly followed suit and introduced their own varieties. These mooncakes have now spread beyond Hong Kong and are available everywhere in Asia. The snow-skin mooncake wrapper is made from glutinous rice flour just like mochi, but with regular rice flour and wheat starch added to provide a firm body. The stiffer dough makes it possible to maintain the molded pattern and shape of the cake. I first tasted snow-skin mooncakes a few years ago in Shanghai and fell in love with them. I’ve since wondered if I could make them at home. This year I researched and successfully experimented with a few recipes. So here is my recipe for snow-skin mooncake with cherry almond filling. As much as I dislike the commercialization of the Moon Festival, I am actually quite pleased to have found innovations in modern mooncake making. Why I’ve Been Making Mooncakes

Bittman and the Fermented Black Beans