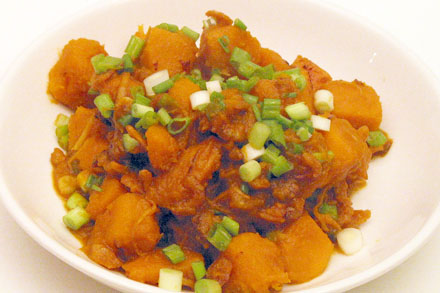 In our household Thanksgiving dinner is a sacred tradition. My partner Warren insists that we only serve his mother’s New England Thanksgiving dinner. For years I’ve not strayed from her traditional menu, which includes roast turkey with oyster stuffing, orange cranberry sauce, homemade pickles, creamed peas and onions, mashed Butternut squash and turnip, and mashed potato. For dessert we routinely serve apple and pumpkin pie. At the end of the meal there’s usually rarely any apple pie left but plenty of pumpkin pie. And there’s always uncooked pumpkin left from making the pie. This year I decided to use it to make a very traditional Chinese stir-fry.

Most of my American friends are usually surprised when I use pumpkin in Chinese cooking. Originally introduced from South America pumpkin is now a very common ingredient in China. It is used to make soup, stew, sweet dishes, and of course stir-fry dishes. Two months ago I served steamed glutinous rice with bacalao and pumpkin at a dinner. When I created this recipe I was expecting my guests to comment on the unusual selection of bacalao not the unlikely response that they didn’t think pumpkin was a Chinese ingredient. True to its Chinese name of “Southern squash” (南瓜) the pumpkins are most commonly found in Southern Chinese cooking. Guangdong and Fujian in particular produce pumpkins in abundance, and their regional cooking reflects affection for this squash. There are many varieties of Asian hybrid pumpkins but only one, the Kabocha pumpkin, is commonly found in America. In China one can find papaya shaped pumpkins or smooth green round pumpkins with a net pattern. None of them have any English names that I know of.

Today’s recipe for pumpkin is a very common Fujianese home-cooked dish known as Stir-Fried Pumpkin with Dried Shrimp (海米炒南瓜). The pungent shrimp flavor beautifully contrasts with the sweet mild pumpkin taste. But best of all I can use up the pumpkin leftover from Thanksgiving.