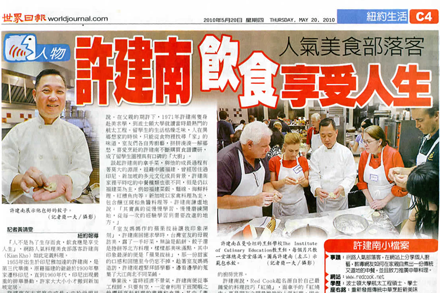 Last Thursday there was a two-inch red headline in the World Journal (世界日報) profiling me and my culinary endeavors. I was very excited by this coverage. Through the Culinary Historian of New York I was invited this past March to participate in a panel discussion on “Chinese Food in America Today.” During the event I met a reporter from World Journal, the largest Chinese language newspaper in North America. A few weeks later this reporter emailed and wanted to write a profile about my cooking experience. So she interviewed me and a photographer took pictures of me during one of my cooking classes at the Institute of Culinary Education. I was feeling quite pleased by the size of the headline until I realized every other page of the paper contains a two inch red headline. If you can read Chinese here is the article, otherwise look at the pictures anyway.