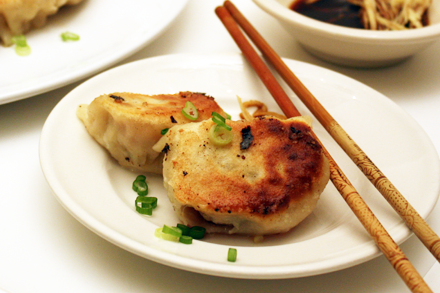 (家,春,秋), the author describes the life of a Chinese aristocratic family during the final years of the feudalistic Qing dynasty. It was a tumultuous time in which the family members had to negotiate changing political landscape as dynastic rule disintegrated, as well as the family’s own struggle between generations over changing values and aspirations. Ba Jin was a great observer and narrator of a China struggling within and without while falling into chaos at the beginning of the twentieth century. Among all the confusions and upheaval, there is one single constant and that is the communal family meal.

Whether it was an elaborate sumptuous spread of the upper class or a meager bowl of porridge of the poor, sharing communal meals was a social ritual. Families gathered for special celebrations and revolutionaries gathered for clandestine dinner meetings. These meals were not always happy and agreeable occasions. Tensions among family members often boiled over during them. But they gathered and shared their food nevertheless.

This practice continues among the modern Chinese family, although much of the characteristics have changed. It is more functional than romantic. While most family meals are enjoyable and pleasant, family tensions continue to intrude. Certain thing just never change. Sharing communal meals often involves the preparation as well. Family members get together to wrap dumplings or to help cut up ingredients for the hot pot.

Among communal meal preparation activities, making dumplings is my favorite. I learned to make dumplings from the mother of my Taiwanese college roommate. She was originally from Dongbei, where dumplings are the regional specialty. We made boiled dumplings (餃子) together when she came to visit. It wasn’t long before I started inviting friends to share communal dumpling making as well.

The recipe I’m offering you here can be used for making boiled or fried dumplings. I’m going to give you instructions on how to make fried dumplings, or pot stickers (鍋貼) as they are known in Chinese, because I simply adore them that way.

Unlike the pot stickers in many American Chinese restaurants, these dumplings are not boiled or steamed before frying. Traditional pot stickers are fried and steamed in the same pan. The key is to make sure you cook them over medium heat.

First grease a frying pan generously, and then arrange the raw dumplings in the pan. Lightly crisp the bottom of the dumplings, then add water to the pan and cover. Steam the dumplings until the filling is cooked then remove the cover to let the water evaporate. Make sure all the water is completely cooked away before attempting to loosen the dumplings. If you follow these instructions you should have no problem flipping the dumplings off of the frying pan.

, the first book in the trilogy. Not only will you enjoy this book, you’ll want to buy the rest of the trilogy. But don’t forget to share a family meal while you’re reading through the set. 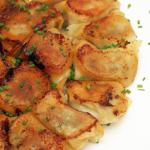