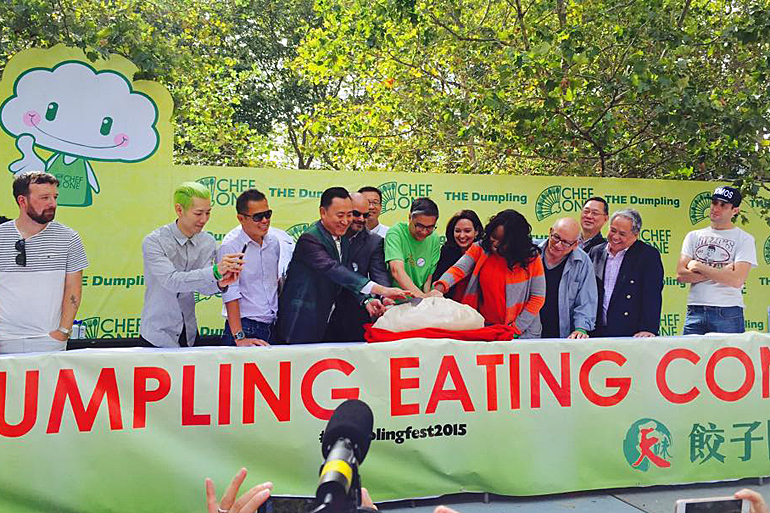 While the dumplings were the main attraction of the festival, the crowd was entertained throughout the afternoon by a wide variety of events. One of my favorites was the traditional Lion Dance popular in southern China. Two men are inside the colorful lion costume. The one in the front operates the ears, eyelids and jaw creating perfect feline movements. The one in the back does the heavy lifting hurling his companion in the lion’s head high into the air. And they do it while standing on narrow raised tables.

For grace and beauty nothing can beat the colorfully clad Korean ladies of the KTMDC dance troupe. Each dancer held a large fan and when they overlapped them they created formations of pinwheels and flowers. As they moved around the stage the fluttering fans resembled waves and gusts of wind.

The most entertaining event, however, was the dumpling-eating contest. I overheard two people discussing the contest and they kept referring to it as a sports event. So I began to wonder – should competitive eating be considered a sport? One online dictionary defines a sport as “an activity involving physical exertion and skill in which an individual or team competes against another or others for entertainment.” As a judge for the dumpling-eating contest I was definitely entertained.

With the final scores from the two-minute bouts ranging from 7 to 93 dumplings consumed, I decided that winning must require some specific skills. Special Guest Takeru Kobayashi, the six-time winner of Nathan’s hot dog eating contest in Coney Island, gave demonstration and wolfed down 32 dumplings in 30 seconds. This year’s female winner Molly Schuyler broke her previous record by consuming an astounding 93 dumplings in two minutes. They both have similar competitive styles.

It’s all about efficiency. Sit down at the table. Lean over and get your face as close to the bowl as possible. Eat each dumpling whole. If you cut them up you’re wasting time. Squish them together so that you have a steady stream of food going down your throat. Grab a sip of water on the fly to keep your esophagus lubricated. Develop a rhythm that lets you maintain a faster pace. And while you’re doing all this, remember to breathe.

One of the rules – yes, there are rules – says that you can count any dumpling in your mouth after time is called so long as you eventually swallow them. So in the last few seconds the competitors cram as many dumplings as possible into their mouths, and sit chipmunk style, trying not to spit out anything from their puffed out cheeks.

After the dumplings are swallowed the winning contestants behave like real athletes. Just like sprinters they are panting and drinking water. But is the panting caused by holding their breath or real physical exertion? Besides, the water was probably used to clear the airway rather than fight dehydration. I just can’t decide if eating really is a sport.

But there is one thing I do know. In the heat of the moment, with a thousand fans cheering, a bite by bite commentary by an ESPN NY radio commentator, and a $2000 cash prize on the line, competitive dumpling eating certainly felt like a real sport.

We Have a Winner!