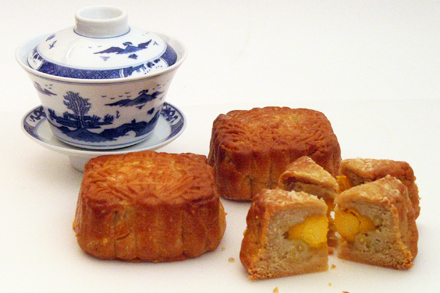 All my friends thought I was out of my mind when I told them I was going to make homemade mooncakes. Well you see mooncake is one of those things better left for a professional bakery to make. Making them is time consuming and can be very tricky to handle. But the idea of making them at home intrigued me, and I was determined to make an attempt for the Mid-Autumn Moon Festival this year. In fact I wanted to experiment with more modern and innovative flavors. So, I got on Amazon and ordered two mooncake molds

You might be very familiar with the traditional Cantonese style mooncake, which is made with a very thin bread-like wrapper around many different sweet paste filling. What you probably don’t know is that there are many other numerous varieties from various regions of China. Different regions in China have their own traditions of making wrappers and fillings. Some wrappers are made with flakey pastry-like dough instead of the simple flour dough. And then there is another whole variety known as ice skin mooncakes (冰皮月餅), which are made with snowy white, almost translucent rice flour dough. But it is the filling that makes the cake, and there is a seemingly endless list including lotus seed paste, sesame paste, red bean paste, caramel custard and other sweet pastes. They are sometimes even made with savory filling. Many bakeries in China are now becoming very innovative and offer new modern flavors. For my first stab at making mooncake I decided to make Cantonese style. But I wanted the filling to be a little more modern. So I created an Earl Grey paste made from lotus seed paste and strong Earl Grey tea, plus pine nuts for extra texture. I also like salted egg yolk in traditional mooncake, so I decided to put one in each of the cake. In this recipe I chose to replace lard, which is the fat of choice in traditional Chinese pastries making, with vegetable oil. It may not be as tasty but at least is healthier.

Making the filling did not cause too much of a problem for me because I’ve made lotus seed paste before. But wrapping the dough around the filling was a challenge. The first few I made, I couldn’t get the dough to be a consistent thickness around the cake. I then researched for tips among Chinese language blogs and discovered that the dough should not be rolled out. Instead use your hand to form a bowl shape thin dough wrapper, before dropping the filling into it. It took me an entire afternoon to make this batch of mooncakes. I love the result and I like the fact that no preservatives went into making them, unlike commercial varieties that need to extend their shelf life. Making mooncakes truly is a labor of love, so if you feel compelled and are adventurous then lets make them. Here’s the recipe.

Quenching Your Thirst in the Tropic