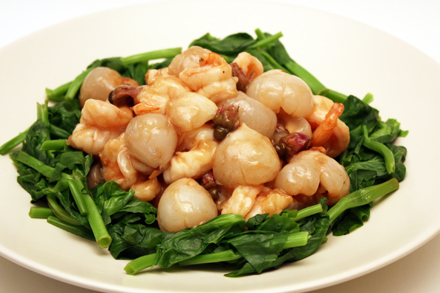 Summer in Shanghai heralds the arrival of bountiful local fruits like lychees (荔枝), longans (龍眼), peaches, and yangmei (waxberries 楊梅). Street vendors hawk them from overflowing bamboo baskets, which they carry on poles balanced on their shoulders. They are a welcome, yet increasingly rare, sight in modern Shanghai as urban life whizzes by. Although I’m not adept at the art of bargaining I would always try to get the best deal from the vendors. It simply is part of commerce in China. After successfully negotiating a purchase I would bring my fruits home, chill them and serve them at the end of dinner. But this is not the only way to enjoy these summer fruits. Cooking with fruits is a long-standing tradition in Chinese cuisine.

In particular lychees, which hail from the land of Cantonese cooking, are often found in Cantonese stir-fries. They can be used to accompany chicken, shrimps, pork or beef. You might expect these combinations to produce some of the most refreshing dishes for the summer. But lychees, as it turned out, are considered to have a yang property according to the Chinese food therapy philosophy. Because of this tendency to increase body temperature they are unsuitable for summer consumption. However there is a remedy.

I am going to share with you a recipe that makes use of lychees, yet includes an ingredient to balance the yang character. This ingredient is rose tea, which has a yin or “cooling” affect. Rose tea, often used in iced tea drinks, is perfect for reducing the yang energy in lychees. The recipe is Rose Flavored Stir-fried Shrimp with Lychees. Rose tea is an infusion made from dried rosebuds. They are usually paired with green or other herbal tea. The rosebuds impart a faint fragrance to the tea that can be very intoxicating. In this recipe the rose aroma complements the sweet flavor of the lychees in a very subtle way. Fresh lychees should be used in this recipe because the fresh fruit taste should still be evident after they are lightly cooked.

For years canned lychees were the only way Americans got to taste this fruit even though Florida farmers have cultivated them for many years. But recently there’s been an increase in production and improvement in transportation. Ethnic Asian markets in major U.S. cities now sell large quantities of fresh lychees in the summer. In New York Chinatown the season starts at the end of May, peaks in the beginning of July and ends at the beginning of August. So don’t wait any longer before you try to make this dish since lychees are only in season for a few more weeks. Durian… “Like Eating Sweet Raspberry Blancmange in the Lavatory”