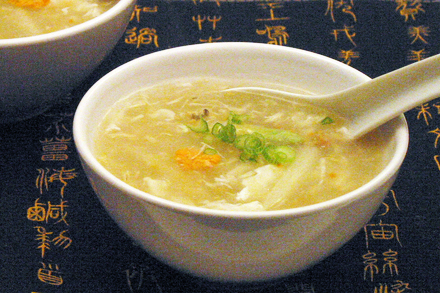 Hunting for white asparagus at the start of the summer is not exactly orthodox. But that is what I found myself doing a few days ago. It’s not that I haven’t had any asparagus this spring. There was an abundance of green asparagus in the farmer’s markets and Pathmark across the street from where we live. Over the last few months I’ve had them steamed with butter, grilled with olive oil, dressed with Hollandaise sauce and mixed in fried rice. But a few days ago I spotted some fresh and peppy looking mud crabs in Chinatown, which instantly suggested “white asparagus and crabmeat soup” like those found in many traditional Chinese restaurants in Asia. This notion suddenly became an obsession and I immediately bought some of the crabs and went on a quest for white asparagus.

I fondly remember this elegant soup from many banquets when I was still living in Singapore. It was often included in family holiday or birthday celebrations. Served in an individual white ceramic soup bowl set on top of a silver plated tripod, the soup looked like a Jackson Pollock painting colored gold from the asparagus, white from the crabmeat, and bright orange from the crab roe. Unfortunately I don’t see much of this soup on restaurant menus anymore. Perhaps it is too old-fashioned, and is out of favor among the ever-modern diners demanding “innovative” cooking. Another important ingredient of course is fresh crabmeat along with its roe. The roe imparts a distinct sweet ocean scented flavor. The Chinese prize crab roe precisely because of this special quality, which in this case complements the earthy flavor of white asparagus. Chinatown fishmongers consistently stocks female crabs full of roe. You can determine the gender by looking at the shape of the abdomen, or “apron,” on the belly of the crab. The mature female crab displays a round shape “apron” and they are usually slightly more expensive than their male counterpart. Fortunately I found white asparagus after only searching in two markets in Chelsea. Along with the mud crabs from Chinatown I made this wonderful soup for a small gathering with our neighbors. It was a hit and I thought I succeeded in bringing this soup up to date with fresh ingredients. Maybe with this improvement we can look at this classic soup in fresh light.

Dumplings & Dynasties – Before the Storm