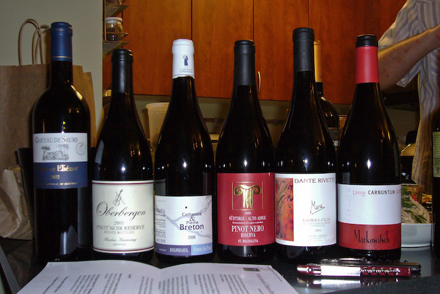 Have you ever wondered why the wine lists in your average Chinese restaurants are so limited or non-existent? One would think that with a cuisine so wide-ranging and creative, there would be a sophisticated wine culture accompanying Chinese food. Well, there is. It’s just not the same wine we know of. When mentioning “wine” to a Chinese you need to differentiate between the indigenous “grain-based wine” made from rice, sorghum or barley and the imported European “grape-based wine.” But it doesn’t mean grape wine is not fitting for Chinese food.

Seen as a novel foreign introduction, the Chinese are at a loss as to what to make of “grape” wine. Local wines produced by newly established vineyards are sold in the market bundled with a bottle of Coca Cola or Sprite. It gives a whole new meaning to the phrase “mixed drink”. I heard a story of a Red Army general who opened two cases of champagne half an hour before a banquet because he had heard that wine needed to breath. The place where Chinese food meets wine can be hazardous.

Nevertheless pairing wine with Chinese food can be both challenging and rewarding. I decided to challenge my friends in the wine business a few months ago and arranged a 10-course banquet for them to come up with wine pairing. I asked each of them to pair wines to four courses of their choosing. The menu included items typical of a Chinese banquet with seafood, fowl, meats, vegetables, soup and starch. I also explained the spices and cooking methods used for each dish. The result of this exercise was quite remarkable. In addition to the usual suspects of the grape wine varieties, one guest brought three bottles of sake as well. In all there were twenty bottles of wine. Here is the menu along with the suggested wines brought by my guests.

Needless to say the banquet was full of discussions, friendly debates and discoveries. In the next few posts I will be sharing with you some of the reactions from the experts. So stay tuned. In the meantime tell me what you think of the pairings?