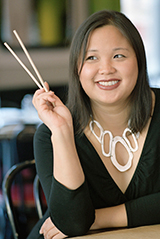 Several days ago I conducted an email interview with Jennifer 8. Lee. Having recently read her new book, The Fortune Cookie Chronicles

, I had lots of questions I wanted to ask her. Yesterday, I shared with you how Jenny’s book resonates with me as I explore my own food roots. Today I’d like you to see Jenny’s complete interview.

Not Your Grandmother’s Chicken Soup