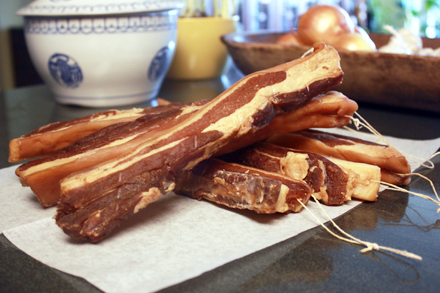 Since the Zhou Dynasty (周朝 about 3,000 years ago) the twelfth month of the Chinese calendar has been designated as a time for ritual sacrifice to honor the gods and ancestors. This ritual is known as “laji” (臘祭). Animals were hunted for offerings, and the meat consumed during the ceremony. Over time preservation techniques were developed to conserve the leftovers for winter consumption. One curing technique known as “la” (臘) consists of salting and drying of the meat. This brings me to the February challenge to make cured pork belly or bacon for Charcutepalooza.

If you’re a follower of online food and cooking happenings and have not heard of Charcutepalooza, you might as well be living in the online hinterland. It is a year long challenge originated by my neighbor Kim Foster and a good friend Cathy Barrow that has become an online runaway phenomenon. Bloggers and cooks everywhere are invited to make cured meat every month based on a different technique. Then they are encouraged to write their experience for everyone to share. It started with duck prosciutto in January when nearly three hundred participants responded. I decided to join in the fray for the February challenge by making cured bacon with a Chinese twist.

Cured bacon, or “larou” (臘肉), is a southern China specialty. The “la” technique calls for curing the meat in a liquid of salt, soy sauces, sugar, wine and spices, and then air-drying. Occasionally the meat is smoked after being dried. The meat used for “la” curing can be pork belly, duck, fish or sometimes venison. Traditionally the “la” technique calls for the meat to be brought out into the sun for drying a few hours each day. This method promotes dehydration and also partially renders the fat from the meat. The heat from the sun also gives a fragrant nutty taste to the finish product. For my attempt I decided to sun dry the bacon strips in my very sunny window during the day, and store them hanging in the refrigerator overnight. In the Cantonese tradition the curing liquid is made with salt, soy sauce, sugar and rose flavored wine, while in the Sichuan tradition spices are added. I chose to make the Sichuan version of five-spice cured bacon. You are probably already quite familiar with five-spice powder. It is a spice mix that’s used in barbeque and braised meat. It is also often blended with salt and served as a condiment. Instead of using the powder I am going to use whole spices in the curing liquid. This is a technique used by professional chefs so the meat will not contain gritty spices at the end.

Five-spice is most often made from a combination of Sichuan peppercorn, clove, star anise, fennel and cassia bark (similar to cinnamon). Although these are the basic spices there are many variations to the formula, which are often held as closely gauarded family or trade secrets. In my recipe I am using the basic five spices in about equal proportions. I started my meat curing a few days ago so I am rather late for the Charcutepalooza deadline. This means that I will not be able to actually share the tasting of my home cured bacon now. But I plan to make a dish of stir-fried five-spice cured bacon with winter bamboo shoots and shiitake mushrooms. I will share this recipe with you in my next post. Until then happy Charcutepalooza! 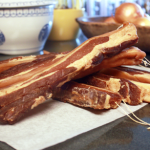 Luosong Soup: Too Chinese to be Borscht?

A Love Affair with Pan-Fried Noodles