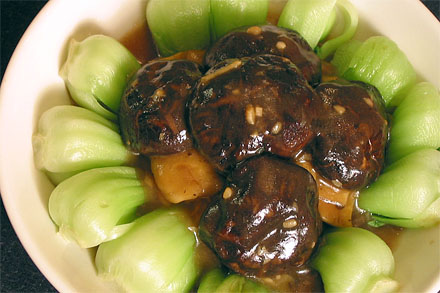 I was in Chinatown last weekend shopping for Chinese provisions to bring back to Harlem. To my delight I noticed that dong sun (冬筍), or winter bamboo shoots, are in season. Winter bamboo shoots are one of the prized vegetables, along with dong gu mushrooms (冬菇 or winter mushroom) eagerly awaited in markets by shoppers in China during winter. They used to be two of the few fresh vegetables available during the harsh winter months. Therefore they are revered and commonly paired in winter dishes.

Winter bamboo shoot, the very young tender shoot of a bamboo variety during winter, is something that one has to sample to understand why it is so sought after. It is nothing like the normally available larger variety, either fresh or canned. It has a much crunchier texture and subtler flavor. When used in stir-fry or soup it can provide a nice contrast in texture and freshness in flavor to other vegetables or meats. For many years they were only available in canned form in America. However in recent years they have been air flown from China to Chinatown markets during the season, which lasts from January through March. On the other hand dong gu mushroom (winter mushroom), which is a variety of Shiitake mushroom, has been available in Chinatown markets for years. This variety of mushroom is commonly cultivated during cold weather, and hence the name of the mushroom. It is now available year round in Chinatown. This mushroom can be identified by the cracking pattern on the cap. It has a very smooth tender texture when cooked and is often used in Buddhist vegetarian dishes to imitate meat. It is also commonly available in dried form and used extensively in Chinese cooking.

A dish that pairs these two winter vegetables, called Double Winter Delights (蠔油炒雙冬), is one of my favorite winter dishes. I love this dish because of the contrasting texture and flavor between bamboo shoots and mushrooms, creating a wonderful taste sensation. These two ingredients are stir-fried then simmered in oyster sauce resulting in a smooth savory dish.